The Pope kissing the hand of a Jewish man at Yad V'Shem? 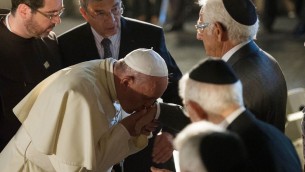 (As our Rabbis remark when Yosef reveals himself to the brothers OY , from the day of judgement , Oy, from that ultimate shame)

Not yet,quite, but the world is changing.

There aren't supposed to be Yidden living in our homeland,

nor Yidden praying in the Temple area.

But the article says

"How Jews being saved while not believing .. ..  ....can be possible remains an unfathomable mystery..."

But somehow, the world is changing !

The Parshayot of V'Yeshev and Miketz, are usually read Chanuka time.We even find the Gemerra in Mesechta Shabbas which discusses Chanuka, quoting from the posuk from V'Yeshev ,'The pit as empty' , and comments, enigmatically -' except for snakes and scorpions.Such things,especailly in the world of torah, do not 'happen' by chance.

In earler parshiyot , haShem speaks to Adom , to Noach,and to the Patriarchs, who had both prophecy and continual involvement with angels.But with Yosef,as he descends into the darkeness of golus , that direct 'connection' weakens into the confusion of dreams.We see that again later in our history.During the time of the first Temple, we had prophecy.Whereas Daniel,in a very similar situation to Yosef, interpreted dreams.

Again, the "shir hamaalos" in Tehillim which describes the redemption uses the phrase -- Hayenu k'cholmim' - we were like dreamers.

I saw an incredible discussion by the late Rosh Yeshiva of the Philidelphiyia Yeshiva., hagaon Rav Schwei.The interpretations that Yosef, saw in the dreams were not really implicit .After all, a person dreams are a reflection of what they are thinking during the day.Pharao and the winemaker and baker, ere not into high thinking.

But Yosef knew the blessings and promises and the Covenants haShem had made with his forefathers, and he remembered his own dreams.He was anticipating the redemption, so he understood that these 'dreams' had a higher import, and it was that 'Message ' that he saw and relayed.

And that is the real point; the redemption was built on his bitachon;it was the faith with which he grew up, that made him understand there was a message from Above.How much strength, thrown into a pit and sold into slavery by his brothers, and then thrown again into a pit by a libel from his master's wife, how much can one person endure!

It is this bitachon that has kept us alive through all the incredible tribulations of our long golus.There is a famous quote from R' Yonasan Eybeschutz that the greatest of all miracles is our survival amongst the 70 wolves.

So, "as the dreidle turns,'and the people who invented anti semitism and preached it and exported it, see the impossible , according to their dogma, happenning before their eyes, and see also the vengeance of the Ishmael lunatics pouring into the Europe filling the void left from the Yidden they murdered and chased for millenia, the King of Spain says to the Jews - "we miss you".

But we know that all the haShem does in this world ,he does for his Jewish children.And we see, with each disaster,Yidden coming closer together, not just out of fear, but out of love and concern , a sense of 'achdus.'

This ruach of Tahare (spirit of purity) by our people spills out and effects all of Mankind.

We are in golus because of sinas chinom (hate for no reason).

When the brothers came to Egypt , Rashi teaches that they entered seperately (Their father was afraid of ayin hare and they were looking for Yosef).Because of this Yosef was able to test his brothers with a charge of being 'spies.'The source of all the libels against our people is our being seperate.This is what the medrash means, that when they went to graze their fathers' sheep, they went to graze themselves.

This is the real fault and danger of secularism, Hellenism,or whatever may be the name in that generation.The seforim say that the Land of Israel,is what brings us together and makes of all of us a 'klall', a 'People'.We have all heard 'The whole is greater than the sum of its parts' .With Yidden it is more than that. How can one person , alone , truly connect with the 'Ein sof'(the Boundless)?A Jew alone is a half person ,which is the symbolism of the chazi shekel (half a shekel) given for the sacrifices.

When Yehuda haMaccabe said 'Me LaShem Eli!', the people rallied together, and became one people.It was that ruach of purity which won the wars and kept the lights burning for 8 days, as we are taught by the Maharal - 8 is above Nature.

It is that pure light of Torah which keeps us alive through all and above all and enables us to give thanks and praise to haShem as we look forward with bitachon to the time we will be fully 'a litght unto the Nations.'